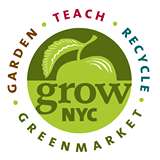 In 1976, the Council on the Environment of New York City (now GrowNYC) established the Greenmarket program, which provided regional small family farmers with opportunities to sell their fruits, vegetables and other farm products at open-air markets in the city. There were originally seven farmers at the first Greenmarket, and their selection sold out by noon. That summer, two more markets opened in New York City. Despite some backlash from local merchants and supermarkets who believed the Greenmarket was cutting into their profits, more markets opened in the city.

Today, the Union Square Greenmarket – the best-known of the markets – is held Mondays, Wednesdays, Fridays, and Saturdays between 8 AM and 6 PM year round. The market is served by a number of regional farmers, as the average distance between farmers and the market is 90 miles (140 km). During peak seasons, the Greenmarket serves more than 250,000 customers per week, who purchase more than one thousand varieties of fruits and vegetables can be found at the Greenmarket; and the variety of produce available is much broader than what is found in a conventional supermarket.