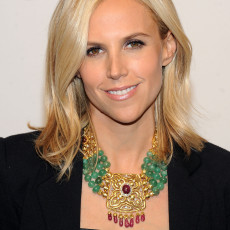 Tory Burch is an American lifestyle brand that embodies the personal style and sensibility of its Chairman, CEO and Designer, Tory Burch. Launched in February 2004, the collection includes ready-to-wear, shoes, handbags, accessories, watches, home and beauty.

On the outskirts of Philadelphia, Tory grew up a tomboy, climbing trees and playing in the backyard with her three brothers. Her parents, Buddy and Reva Robinson, were consummate entertainers, serving lunches on the poolside porch, all fretwork and white lattice, and always with fresh flowers on the table. Then there were their travels — Marrakech, Athens, Capri… Photos of Buddy and Reva in the Sixties and Seventies would prove endlessly inspiring, he in his loafers and Hermès scarf-lined jackets and she, channeling bohemian glamour in her long caftans.

By the time Tory launched with a small boutique in Nolita in 2004 — after graduating with a degree in art history and working for designers Ralph Lauren, Vera Wang and Narciso Rodriguez at Loewe — her exacting eye for that era was set. And now it was coupled with the energy and spirit of New York to create a design vision that was uniquely hers, one that resonated worldwide from a hit ballet flat and tunics inspired by that  flea-market find to the stores themselves, with her vibrant interiors.

The story unfolds on the entrepreneurial front, too, with the 2009 launch of the Tory Burch Foundation. Its aim has always been one central to Tory: after realizing her dream of starting a company, she wanted to give back and support women entrepreneurs. The Tory Burch Foundation supports the economic empowerment of women in the U.S. through small business loans, mentoring and entrepreneurial education. The foundation is currently partnered with ACCION USA, a non-profit domestic microfinance provider founded in 1991. Burch’s stores sell products whose proceeds support the foundation’s work.

Among its initiatives, the Tory Burch Foundation offers an entrepreneurial education program, in collaboration with Goldman Sachs 10,000 Small Businesses and Babson College. The foundation also offers a fellows competition providing women entrepreneurs a chance to compete for business-education grants, year-long mentoring, and a $50,000 grant plus a $50,000 no-interest investment in their business.

In 2005, Burch won the Rising Star Award for Best New Retail Concept from the Fashion Group International. In 2007, she won the Accessory Brand Launch of the year award at the Accessories Council Excellence Awards. In 2008, Burch won the Council of Fashion Designers of America award for Accessories Designer of the Year. Working Mother included her on their list of the 50 Most Powerful Moms of 2015. In 2015, she received the Breast Cancer Research Foundation’s Sandra Taub Humanitarian Award.

Burch has consistently been included on Forbes‘ list of The World’s 100 Most Powerful Women. As of 2015, she is listed as the 73rd most powerful woman in the world by Forbes.