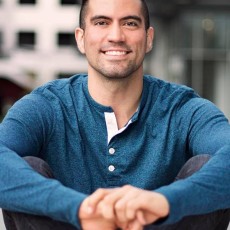 A Venezuelan national, Oscar “Ojker” Rodríguez has been living in Costa Rica since the end of 2010, where he emigrated to seek new opportunities. Since arriving he began his professional training as a dancer at Warehouse Dance Complex. There he started with Hip-Hop classes and immediately proceeded to fall in love with other disciplines such as Jazz, Ballet, Contemporary, Tricking and a bit of Tap. He has participated in important seminars like Jump Costa Rica for several years, Chuthis Movement Intensive and MODAS Dance Workshop nationally and internationally, in the latter he received a scholarship for the intensive summer of 2015 in New Mexico, USA. He has received training from well-known teachers such as Duncan Cooper, Layla Amis, Elana Anderson, Jocelyn Danchick, Mia Michaels, Mandy Moore, Katy Spreadbury, Doug Caldwell, Peter Chu, Kumari Suraj, Bobby Newberry, Nick Lazzarini, Teddy Forance, Misha Gabriel , Al Blackstone, Chris Martin, Candace Brown, Kyle Hanagami, among others. With WDC Oscar has sought to belong to the largest projects, including the company “Projects of Extreme Dancers (PBX)”, under the direction of Hiram Castillo and Maripili Araya, with the support of all the staff of the academy, where he had the opportunity to dance in TEDx Young Pura Vida. He was part of the cast of dancers for several openings and curtains of the program “Dancing With the Stars” of Teletica. Oscar also participated as back-up dancer of several artists in the final episode and as a dancer from the Costa Rican group Patterns at Holi One Color Festival Costa Rica. He belonged to the cast of the first musical of Broadway realized in Costa Rica, “West Side Story”, like Pepe (member of the group of Sharks) and participated in a music video of the Costa Rican singer Charlene Stewart.

In his short time in the world of dance Oscar has had enormous achievements both nationally and internationally. His passion for this art is so great that he has maximized every opportunity presented to him along the way. Dance has become a part that completes as a person, a lifestyle that has assumed with great commitment and discipline.