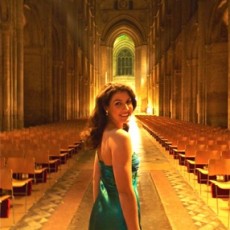 Jennifer Sheehan boasted an early an eager knack for performance and has since childhood performed for audiences from coast to coast and in the UK, including Carnegie Hall, as the guest of Michael Feinstein, Jazz at Lincoln Center, Town Hall in New York, and the Eugene O’Neill Theater Center, among other renowned venues.

Her critically acclaimed shows have entertained audiences at Cafe Carlyle, Feinstein’s, 54 Below, Caramoor Center for Music and the Arts, the Savannah Music Festival, Ely Cathedral (U.K.), the Historic Asolo Theater in Sarasota, The Royal Room in Palm Beach, the Julliard in Aiken Festival, and an extensive list of many other notable concert venues and private clubs as well shows performed for theater such as “The Radio City Christmas Spectacular.”

Multi award-winning vocalist and graduate of The Julliard School Jennifer Sheehan is the first performer to star in the new WNET/WLIW (PBS) TV series, “66th and Broadway,” which premiered February 2015, and is streaming online for a limited time and has since unveiled involvement in the production Stardust.