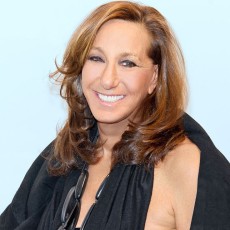 Donna Karan, also known under the alias “DK”, is an American fashion designer and the creator of the Donna Karan New York and DKNY clothing labels. Karan was born Donna Ivy Faske to mother Helen (“Queenie”) and father Gabby Faske in the Forest Hills neighborhood of the Borough of Queens, New York City. Karan’s mother had been a model and had also worked in designer Chester Weinberg’s showroom. In 1966, Karan had graduated high school and then went to the Parsons School of Design.

After leaving college, Karan worked for Anne Klein, eventually becoming head of the Anne Klein design-team, where she remained until 1985, when she launched her Donna Karan label.

Karan began her career as an assistant designer with Anne Klein in the late 1960′s, where she was promoted to associate designer in 1971. As Klein’s assistant, Karan was a participant in The Battle of Versailles Fashion Show on November 28, 1973. When Klein herself died in 1974, Takihyo Corporation of Japan became the new owner and Karan, together with her former classmate and friend Louis Dell’Ollio, became head designer of the house. In 1984, Karan left Anne Klein and, together with her then husband Stephan Weiss and Takihyo Corporation, started her own business “to design modern clothes for modern people”. She showed her first women’s clothing collection in 1985.

Karan became well known for her ‘Essentials’ line, initially offering seven easy pieces centered around the bodysuit which could all be mixed and matched, and created a fully integrated wardrobe with her First Collection in 1985. Karan always insisted that she would only design clothes, like jersey dresses and opaque Lycra tights, that she would also wear herself.

In 1988, Karan, nicknamed The Queen Of Seventh Avenue, extended her women’s ‘Donna Karan New York’ line by creating a less expensive clothing line for younger women, called DKNY. Two years later, she created DKNY Jeans, a denim-inspired collection. DKNY for men was launched in 1992, one year after the ‘Signature’ line for men had been presented. Karan left her CEO position in 1997, but continued as chairwoman and designer for the Donna Karan line. After 2002 Karan’s designer contributions became less and less. In August 2008, Karan relaunched her discontinued fragrance lines from the 1990s.

In 2015, Donna Karan announced that she would be stepping down as head of her eponymous company to focus on her lifestyle brand, Urban Zen, established by Karan in 2007. Urban Zen embraces conscious consumerism, a harmony of philanthropy and commerce.It was an idea Karan cultivated through her leadership on Seventh on Sale, the CFDA AIDS benefit, and Super Saturday, an annual Hamptons tag sale Karan created with Liz Tilberis to benefit Ovarian Cancer Research Fund. Urban Zen offers artisan objects of desire globally curated from Donna’s travels, signature Karan-designed apparel, accessories, art and exclusive handmade Balinese furniture.

Fashion icon and humanitarian Donna Karan believes that through creativity, collaboration, connection and community one can change the world. This conviction lies at the heart of Urban Zen and its Foundation, established in 2007. The foundation is dedicated to three initiatives: preservation of culture (past) and bringing mind, body and spirit to healthcare (present) and education (future). The Urban Zen Center in New York is the Foundation’s home, a place and a space where like-minded individuals come together for forums, educational lectures and fundraisers. Karan considers Urban Zen the natural extension of her desire to find the missing link in the areas she cares most about. It is also the realization of Karan’s dream not just to dress people, but to address them. Karan candidly shares her personal and professional story in her 2015 autobiography, My Journey (Ballantine/Random House).