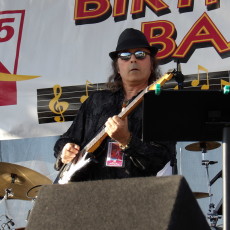 Immersed in music since childhood, Anthony Terrezza was born and raised in New Jersey, and started playing guitar at the age of 8 with the encouragement of his father Louis Terrezza. Louis was an accomplished and recorded singer. Vincenzo Carnevale, his grandfather who was originally from Italy, was a professional concert violinist.

Anthony has shared the stage or opened for many artists including Bobby Caldwell, Max Bennett, Richard Elliott & Tower of Power, Leslie West, 10CC, Alannah Myles, Chris Botti, Leon Russell, Gato Barbieri, Al Stewart and many others at venues such as the Coach House, Orange County Fair, The Galaxy and others. He has toured nationally and internationally in Japan and Europe.

Anthony’s creative guitar sounds have been heard on TV Movies (Discovery Channel, NBC, ABC & TV Commercials, Radio Jingles, Theme Songs for Talk Radio shows), Children’s Albums (Greg & Steve). He has been a session player on hundreds of projects including local solo artists, Cynthia Zaitz, Niki Smart, Chris Daniels and Bob Malone. His performances have been seen on VH1 with Richard Elliot & Tower of Power; and at countless concert venues! While living in Nashville, Anthony worked on Music Row with hit songwriters (“Pacific Sunset” was written with hit songwriter Rand Bishop – a song that is on the “Higher Ground” CD), and earlier in his career he produced and wrote commercial songs for the Morley Corporation and was featured in the LA Times.  In 2008, Anthony was the touring guitarist with Martin Gerschwitz & Friends in the U.S. and in Europe. He performed for over 8 years as “Miami Steve” with an international Springsteen Tribute Band.

Anthony also plays local venues, festivals and concerts such as the Coach House, playing not only his original music, but his unique arrangements of cover songs. His arrangements of “All Blues”, “Whipping Post” “Never Been To Spain” , “Little Wing”, “Love The One Your’e With”, and “People Get Ready”, are all audience favorites.

He has recorded and produced numerous artists in his studio “Blue Knight Studio”.